Bulgur and chickpea salad with zahtar and mint 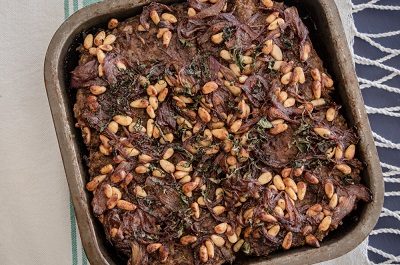 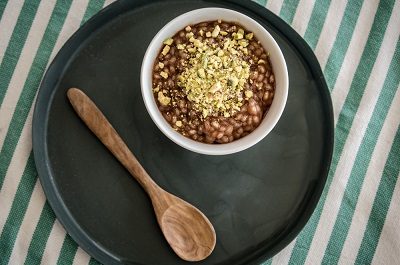 What we love about Lebanese recipes is how they make use of an abundance of ingredients all sourced from within its small borders. You’ll find whole grains, fruits, vegetables, fresh fish and seafood. There’s also a copious amount of garlic, olive oil and lemon seasoning. Without a doubt, we’d say Lebanese food recipes are some of the most refreshing and healthiest recipes around. So what’s stopping you from getting stuck in? Below, we’ve put together some of our favourite Lebanese recipes.

First up, baked Kibbeh with onions, pine nuts and tahini. This is one of the most popular Lebanese food recipes around. In fact, it’s considered a national dish. The actual word ‘kibbeh’ comes from the classical Arab word ‘kabbah’, meaning ‘ball’. Often, many types of kibbeh are shaped into balls or patties. However, a popular way of serving in Lebanon is to serve it as a mixture with bulgur, as a platter.

This is the recipe followed here and the secret to the delicious taste lies in our shawarma mix. It’s a combination of warm, sweet and peppery flavours including allspice, black peppercorns, cinnamon, cardamom, cumin, coriander seeds, nutmeg and mace. As customer Angela puts it in her review - ‘very simply, the BEST Shawarma Seasoning blend I've ever tried. Packed full of flavour and so easy’. We’ll take that!

Next on our list of essential Lebanese recipes, we have two salads. Like we said, Lebanese food recipes are some of the healthiest around and these are no exception.

The bulgur and chickpea salad with zahtar (za'atar) and mint is a perfect representation of how the Lebanese make use of the wealth of ingredients within their borders. It’s very easy to make and really champions our zahtar spice blend - a highly versatile, herbal mix of spices including sesame seeds, sumac berries, thyme leaves and sea salt. Indeed, it’s become a bit of a kitchen staple, being used for roasting poultry, fish and vegetables,  seasoning eggs, grains and, of course, salads. You will love it.

Likewise, toasted bread salad is fantastic. More commonly known as ‘Fattoush’, this is a classic Lebanese salad that is as old as the country itself. Said to have originated in Northern Lebanon, Lebanese farmers fried up their leftover pita scraps in a bit of olive oil for some extra flavor. Then, to build their fattoush, they threw the pita chips in with whatever in-season vegetables and herbs they have on hand. Again - the hallmark of Lebaese cuisine. Making use of the delicious, local ingredients at hand.

Lastly, there’s the rice pudding. In Lebanon, this dish is known as ‘moghli’ or ‘meghli’. This word translates from Arabic as “boiled”, referring to the traditionally long time it must be continuously stirred while boiling. Originally, it was apparently served when celebrating the birth of a male heir, although it’s now used to celebrate the birth of any newborn. You may also find it served during the Christmas holidays, as recognition of the birth of Christ.

In Lebanon, it is important that it’s always served cold so, don’t forget that last important step of letting it cool off!