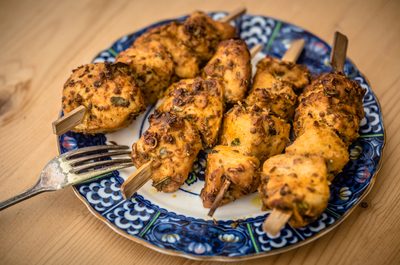 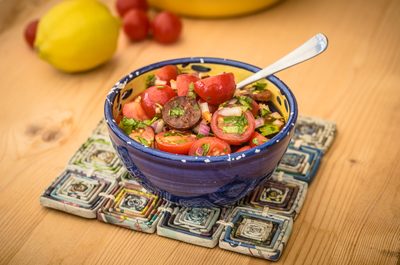 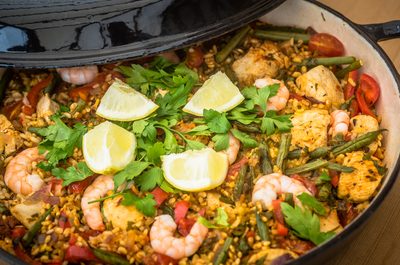 One of the things that Spain is known for is its cuisine. Some of the most well-known Spanish food recipes include paella, tortillas, jamon and the well-loved churros. If you’re thinking of cooking up some Spanish recipes for friends and family, then look no further. To help inspire you, we’ve put together some of our favourite Spanish food recipes.

A great starter to any Spanish meal is Pinchitos Morunos. Similar to a kebab, these are small cubes of meat on a skewer which are then cooked over charcoal. Pinchitos Morunos are originally of Moorish origin. The Moors came from North Africa and occupied a large part of Spain and Portugal from the 700s to 1400s. The Moors were Muslim and would have used lamb for Pinchitos Morunos, but after they were conquered, the Christian Spaniards adapted the recipe and used lean diced pork for this popular tapas food. Before grilling, the meat is marinated with olive oil, herbs and spices such as garlic, cumin, thyme, paprika, oregano, pepper and turmeric. This is a simple yet flavoursome starter that’s bound to impress your dinner guests.

When you look up Spanish recipes, it’s pretty hard not to come across paella. To non-Spaniards, paella is seen as Spain’s national dish (but ask the Spaniards and they’ll likely tell you that it’s a Valencian dish). But whether or not it is the national dish, one thing is for sure - it’s a delicious, well-loved dish. Want to learn more about this crowd-pleaser? Read up on the history of paella here. There are so many versions of the dish which vary according to region and chef. One of our favourites is the Chicken and Prawn Paella. Chicken, prawns, vegetables and rice are cooked together in white wine and chicken stock. You’ll also need our Paella Seasoning Mix, a smoky and savoury blend of smoked paprika, rosemary, thyme and oregano. You’ll also need a pinch of saffron threads which add delicate, floral notes to the dish.

Colourful and savoury salads are a large part of Spanish food recipes. We’ve chosen a Tomato, Chorizo and Parsley salad to complement the Pinchitos Morunos and paella. The salad is a mix of spicy and smoky chorizo, tangy and sweet cherry tomatoes, and fresh and peppery parsley. It’s a light, summery salad which pairs well with a variety of Spanish recipes.